As a violinist, violist and conductor, Julian Rachlin has been enriching world classical music venues with his artistic work for almost three decades. Born in Lithuania, he studied at the Vienna Conservatory with Boris Kuschnir and Pinchas Zukerman. In 1988, he performed under the baton of Riccardo Muti and became the youngest soloist to have played with the Vienna Philharmonic. He also gained reputation with his celebrated festival Julian Rachlin & Friends, which he organised for twelve years in Dubrovnik, but last year relocated to Mallorca. In addition, Rachlin serves as a UNICEF ambassador of goodwill. He is the principal guest conductor of the Royal Northern Sinfonia Orchestra and the Turku Philharmonic Orchestra in Finland. He plays a 1704 Stradivarius violin, known as Ex-Liebig.
Rachlin is a regular guest in Ljubljana. In the previous season, he performed with the Slovenian Philharmonic Orchestra and the excellent violist Sarah McElravy, and this season he will also appear at the first concert of the Orange Subscription Series. For this occasion, he has devised a programme for conductor and soloist in one, featuring Mendelssohn's demanding but popular Violin Concerto, Beethoven's Coriolan Overture and Brahms's First Symphony. Brahms worked on the latter for some fourteen years; due to his great respect for the tradition, especially for Beethoven, he could not decide how to conclude the composition. We are often reminded of his thoughts in this regard: “It is difficult to write a symphony with a giant standing behind you looking over your shoulder.” 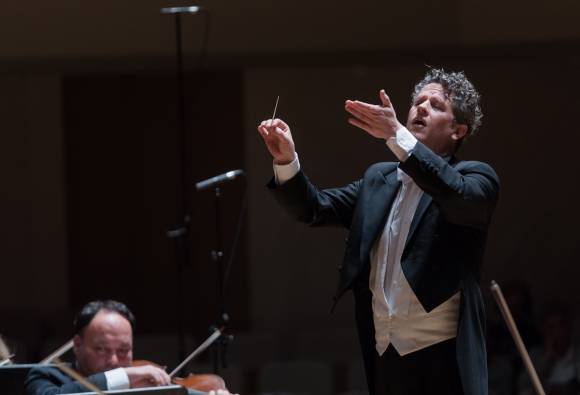