By : Bong Joon-ho
Winner of four honours at the 92nd Academy Awards

Parasite, winner of four honours at the 92nd Academy Awards – in addition to becoming the first non-English film to win Best Picture, the movie also won Best International Film, Best Original Screenplay and Best Director Awards – to be screened on 19 May at 19.00 as part of the Liffe after Liffe Subscription, has been relocated to a bigger venue, Linhart Hall, due to great demand.

No ticket exchange is necessary. Allocated seating does not apply.

Pre-screening talk will be given by Marcel Štefančič, Jr.

A delightful blend of dark humour and social critique, Parasite earned South Korean director Bong Joon-ho the prestigious Palme d'Or.
Ki-taek's family of four is close, but fully unemployed, with a bleak future ahead of them. The son Ki-woo is recommended by his friend, a student at a prestigious university, for a well-paid tutoring job, spawning hopes of a regular income. Carrying the expectations of all his family, Ki-woo heads to the Park family home for an interview. Arriving at the house of Mr. Park, the owner of a global IT firm, Ki-woo meets Yeon-kyo, the beautiful young lady of the house. But following this first meeting between the two families, an unstoppable string of mishaps lies in wait.

"For people of different circumstances to live together in the same space is not easy. It is increasingly the case in this sad world that human relationships based on co-existence or symbiosis cannot hold, and one group is pushed into a parasitic relationship with another. In the midst of such a world, who can point their finger at a struggling family, locked in a fight for survival, and call them parasites? /.../ As a depiction of ordinary people who fall into an unavoidable commotion, this film is: a comedy without clowns, a tragedy without 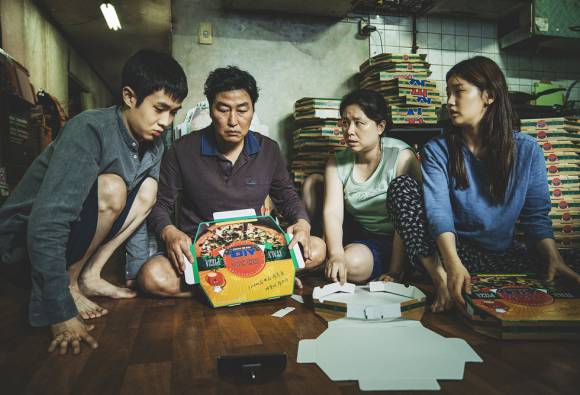